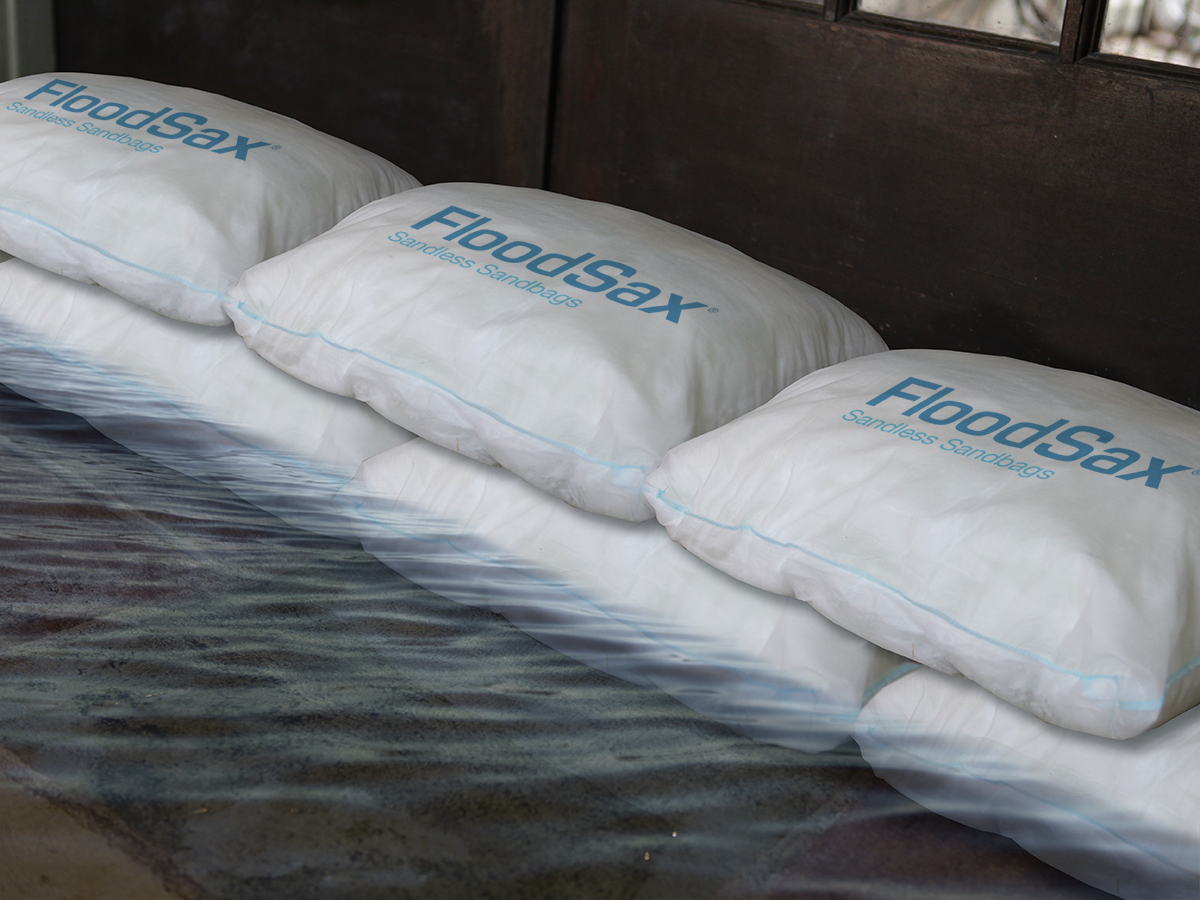 FloodSax are around 96% biodegradable by weight and are known as sandless sandbags because, well, they don’t have any sand in them.

Sandbags are full of one of the earth’s natural resources but can also rapidly deteriorate and the spilled sand is then notoriously hard to clean up, clogs up drains and can cause more environmental damage.

Traditional sandbags also have to be thrown away after they’ve come into contact with floodwater which is always contaminated but, unlike FloodSax, they are not biodegradable.

And, unlike sandbags, FloodSax are flexible and multi-functional so in their dry state they have a large yet very thin surface area so can be deployed inside to soak up drips, leaks, spills and floods to prevent expensive-to-repair damage. They are ideal for hard-to-reach places such as under boilers and beneath pipes.

To use them as flood barriers outside they harness the power of water to stop water. Simply immerse them in water and the gelling polymer inside absorbs up to 20 litres of water to make them as heavy as traditional sandbags but they are more uniform in size so can be easier to move and build into highly effective flood barriers.

FloodSax are vacuum-packed for neat, easy storage with one box of 20 equal to 20 sandbags on a pallet.

Hundreds can be taken to the scene by one person in a car and thousands transported in a van. This vastly reduces the carbon footprint of transporting the FloodSax.

Ordinary sandbags are heavy and take up vast amounts of storage space in large warehouses, using up land and construction materials to build along with expensive energy to light and heat, especially now as energy costs have spiralled out of control.

Ordinary sandbags need large vehicles such as lorries to take them anywhere at another cost to the environment. This includes the vehicle’s engines churning out carbon monoxide which is toxic to humans and carbon dioxide, a greenhouse gas which is thought to be a major contributory factor to climate change.

Delivering FloodSax is two-thirds cleaner to the environment than delivering sandbags.

A full truck load of FloodSax weighs 5,760kg with a cost to the environment of 481g per km.

The damage caused by any kind of flood can be astronomical.

Just one inch of floodwater can cause up to $25,000 in damage and in 2019 the average flood claim payout from the National Flood Insurance Program was $52,000.

Yet spending around $150 on a box of 20 FloodSax would provide sufficient protection to prevent thousands of dollars flood damage to homes and businesses.

Stopping a flood using FloodSax would save all the cost of repairs and the vast amount of raw materials needed to do the full renovation … materials which have rocketed in price recently.

FloodSax have been designed to be largely biodegradable and can go into landfill.

They should be disposed of once they have been used to stop flooding … and the same goes for traditional sandbags.

This is because floodwater is always contaminated and this could range from sewage and chemicals to fuel and oil.

Most of the inner material within a FloodSax - the gelling polymer and wood pulp - is biodegradable.

The most environmentally-friendly way to deal with the FloodSax is to slice it open, drop the gelling polymer inners into your household rubbish bin and then incinerate the outer cover which has nylon stitching and is made from a nylon polymer material.

Once buried 6ft or more, the gelling polymer inside the FloodSax should break down within 3 months.

If FloodSax are used on an industrial scale they could be taken to a specialist disposal company which would use powerful equipment to squeeze the water out of the FloodSax.