Which are the 10 wettest states in the USA and why? 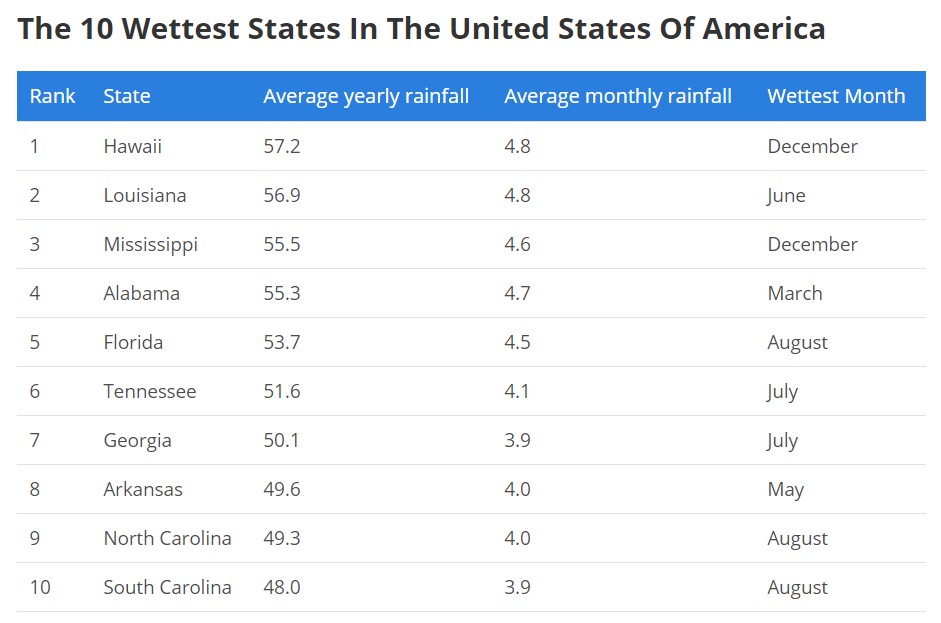 The United States is a country of weather extremes with some states far wetter than others but which are the rainiest states and why?

Well, the top 10 have been revealed by the website World Atlas with states people regard as natural sunshine and holidays states getting the most rain.

According to World Atlas, much of the central and upper eastern part of the US gets evenly distributed rainfall all year round while much of western US and Hawaii gets rainfall during spring, winter and autumn through storm systems that develop in the Pacific Ocean.

This why the top 5 rainiest states in the US are so wet.

The top 5 all have tropical or sub tropical climates.

With all that rain flooding is bound to be a big problem which is why many Americans use FloodSax® sandless sandbags to protect their homes and businesses from flooding. FloodSax® alternative sand bags are space-saving to store and easy to deploy. It means people have peace of mind and are ready for action 24/7 to prevent a flood.

FloodSax® are vacuum-packed and resemble a large pillowcase but once they come into contact with water they inflate to weigh 20kg (44lbs) which makes them more effective than traditional sandbags at keeping floodwater out.

More than 2.5 million FloodSax® have now been sold worldwide and click here to find out more about how they work.